Harnham put out a survey of UK data and analytics jobs annually which seemed more than worthy of a closer look. Below are what I have gleaned from the data in the report.1

These data cover London-based and outside-of-London based jobs, and so one obvious question is how salaries would reflect the location difference. It turns out the pay premium for London-based roles is c. 20%, although this varies by job role grouping.2

The job roles in each grouping are as follows:

On average there is a c. £20k change associated with a change in the level of seniority, entry- to mid-level, mid-level to xyz-lead, etc.3

Looking at progression and also taking into account job areas, we can see that in some areas the progressions are more marked: the chief data scientist enjoys a bigger premium over their juniors than a director of digital analytics, for instance. 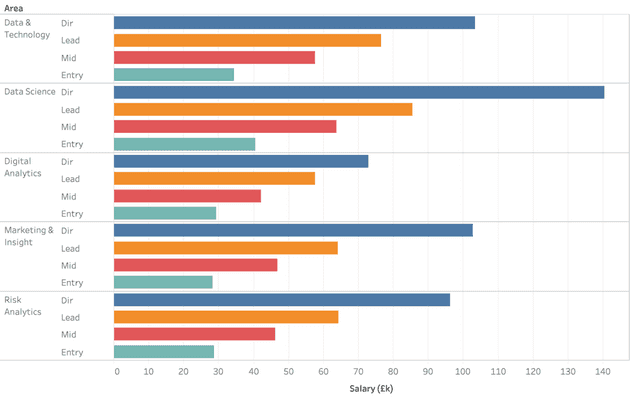 And finally we can see that the higher the salary associated with the job role, the greater the variance in those salaries. 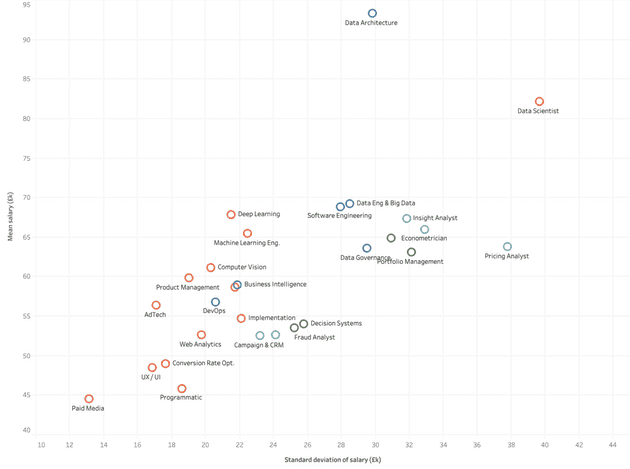 The correlation between mean and standard deviation of salary for a given job role is quite marked, with the mean salary approximately half determining the standard deviation or vice versa (i.e. R2=0.48). Only Data Architecture is an obvious outlier (excluding this, R2=0.58). My guess would be that large financial institutions are responsible for Data Architecture doing so well in these data, particularly considering the premium for cloud know-how.4

Given a sample mean and a sample standard deviation for both London-based and outside-London-based data and analytics roles, it would seem like something of a waste not to come up with some sort of model. Salaries roughly follow a log-normal distribution, so we can take advantage of that to do some inference.5

Given the CDF of this distribution, we can then read off from the second chart what proportion is below that value according to the distribution. By way of example, a value of 50 on the x-axis corresponds to c. 0.33 on the y-axis so we can deduce that a London-based data and analytics worker is in the bottom c. 33% by salary. This is shown by the light blue lines in the second chart.

As it is more natural to read off ‘top y%’ than ‘bottom y%’, we can similarly read off from the third chart 1-CDF and use that to read off what ‘top y%’ is associated with a given salary on the x-axis. By way of example, a value of 75 on the x-axis corresponds to c. 0.30 on the y-axis so we can deduce that a London-based data and analytics worker is in the top c. 30% by salary. This is shown by the magenta lines in the third chart. 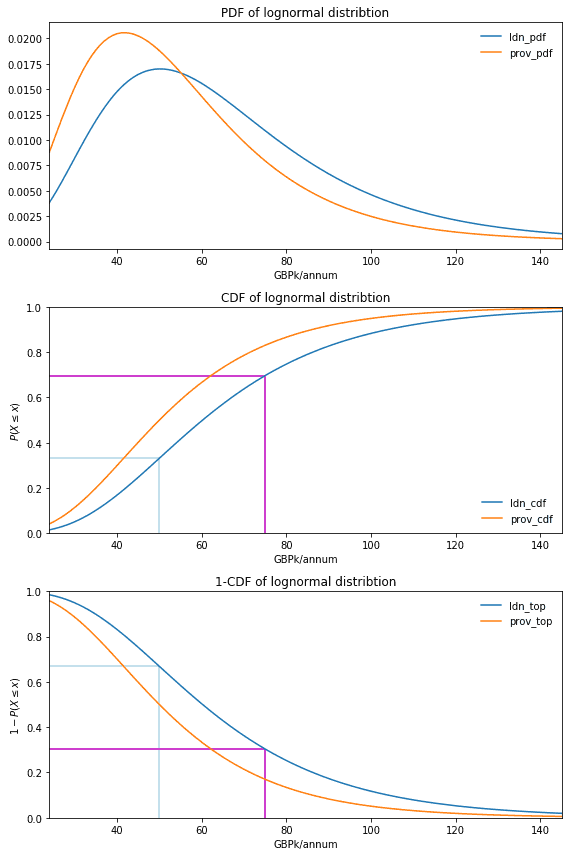